What Data Science Told us in the Final Presidential Debate

There are only three weeks until the one of the world’s biggest hiring decision is made. For the candidate’s final debate interview, the HireVue Data Science team unleashed Insights, HireVue’s deep learning AI platform to analyze the emotional intelligence of both candidates in the final round. In the same way that any job candidate would be evaluated on their performance throughout the interview process, our team also provides summary data to consider that combines analysis from the first and second presidential debates with this week's final debate below. First, we looked at the emotional intelligence (EI) and sentiment of the 2 candidates - both graphs below include the candidate’s results from all 3 debates - Black (1st debate), Red (2nd debate), and Blue (3rd debate): 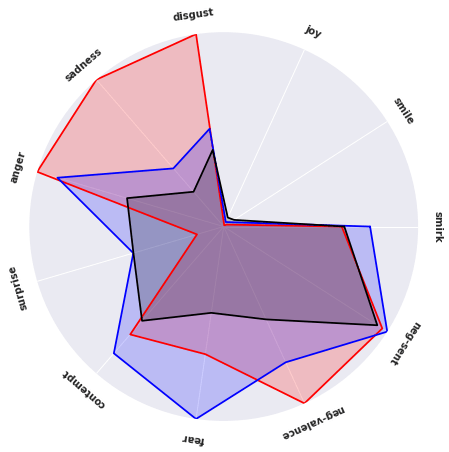 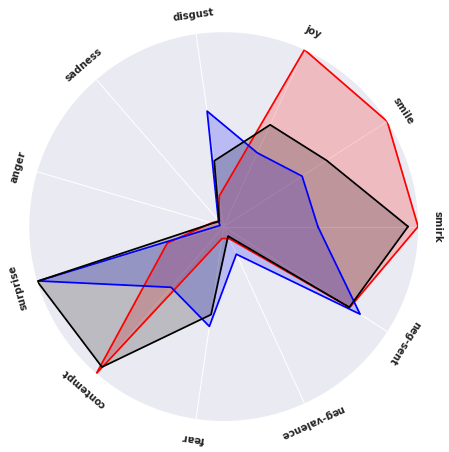 You can see both candidates are fairly consistent across all 3 debates, Trump being most consistent in negative sentiment, contempt, and anger; Clinton is also consistent in her emotional range, however, her extremes varied by debate.  Contempt and surprise returned during debate 3 which were prevalent in debate 1 and her positive emotions - joy and smiling - were less apparent this week. 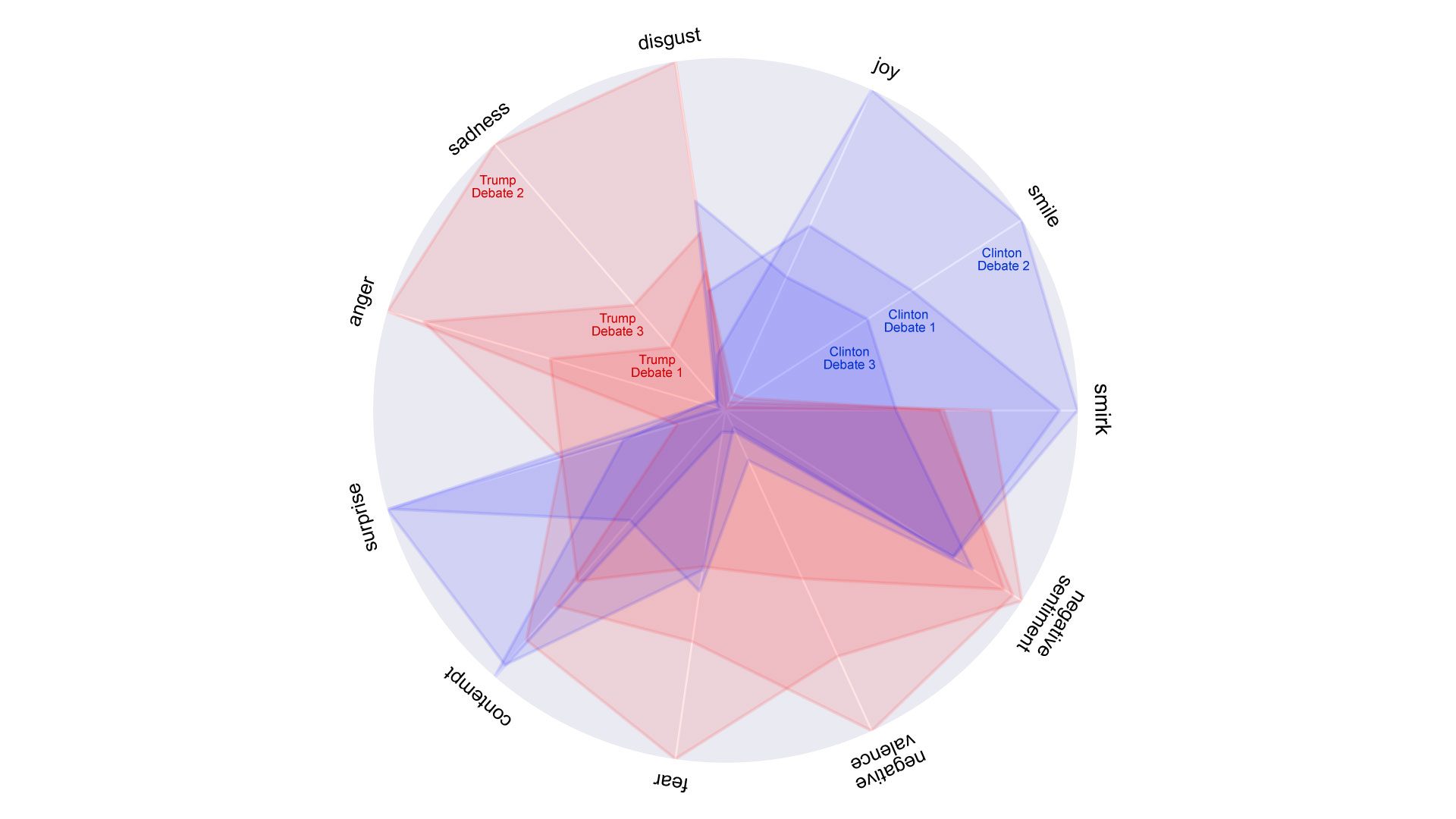 In this graph, the analysis for all 3 debates are plotted for each candidate - the darkest shading is the result of consistent emotion shown over the course of all 3 debates. Again, here you can see the consistency of the candidates' performance across the debates. You can also see the heavily shaded areas where both candidates exhibited emotions - in both negative sentiment and contempt. These emotions were expressed consistently throughout the debate by both candidates. We base the analysis above on the candidate’s video, audio, and language patterns - combining the audio text and speech patterns gives HireVue hundreds of data points on the candidate’s use of language. Then we add facial analysis on top by partnering with Affectiva leveraging their emotion-sensing technology to give a complete picture of the candidate’s EI during the ‘interview’. You can see a deeper dive of the microexpression data below on both Smile and Anger. The confidence up the left side indicates if a smile was likely a full or maybe just a partial smile. Similarly, for Anger we can see at points in the debate Clinton express strong anger, as did Trump and his was more sustained. 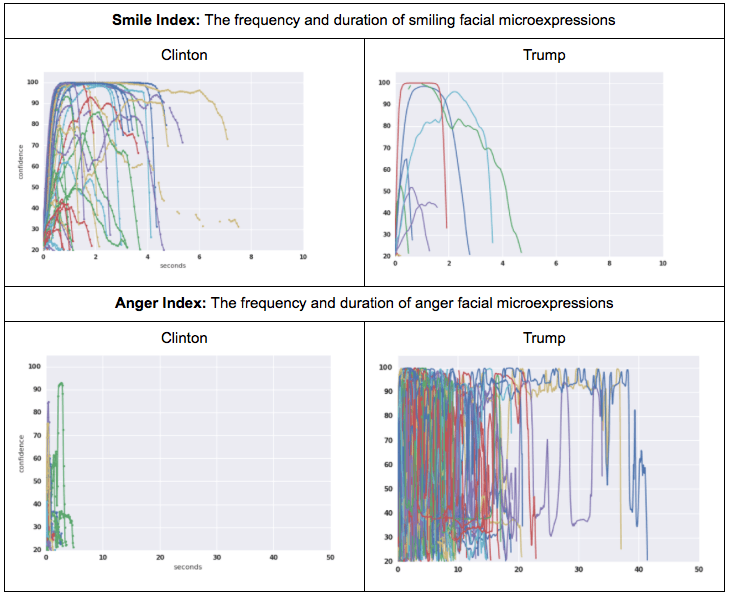 We also dove into the unique speech of each candidate - the word clouds below reflect the words and phrases that each candidate used that their opponent did not use: Trump’s unique words/phrases (not used by Clinton): 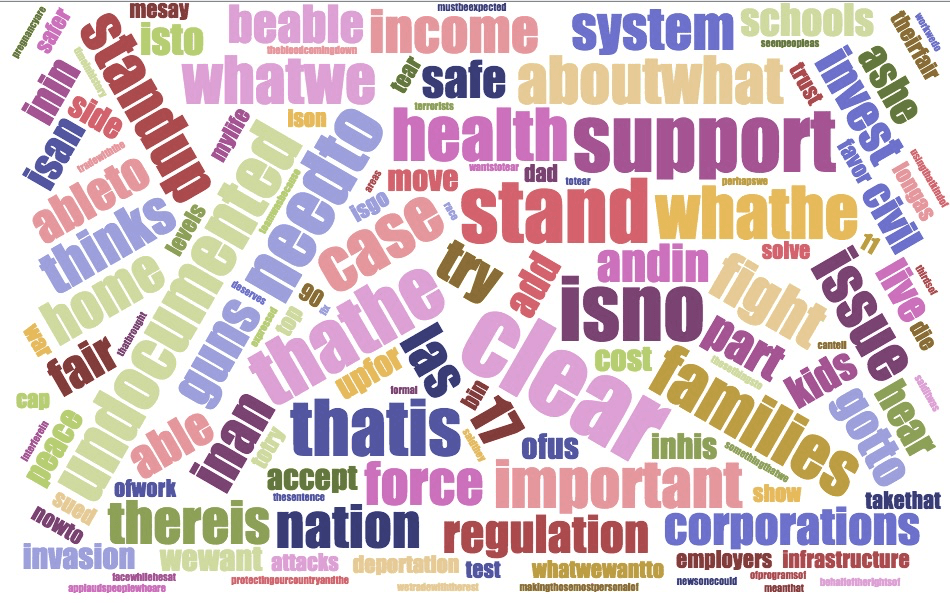 You can read additional coverage on our team’s analysis of the debate on Fast Company.

Learn more about HireVue Insights and how it helped Hilton Worldwide cut time their to hire from 6 weeks to 6 days.

Disclaimer: as mentioned before, our data science team really loves this stuff and sees this as a cool service to the public at large using our ability to analyze video. We do believe in the power of a job interview as a life changing event - as well as the power of technology to bring clarity to that process, but this is not a part of the normal HireVue Insights data model which correlates such attributes to actual job performance metrics.