Every year the Talent Board surveys more than 180,000 candidates applying to roles at 200 companies. The resulting research report is the most comprehensive annual study of candidate experience.

Let’s dig into what’s improving, what’s moving in the wrong direction, and other important trends that came out of the report.

There’s a lot that’s getting better for the average candidate.

1) More Companies are Surveying Candidates About the Experience

When it comes to how candidates are surveyed, things are looking up. Below you can see how 2017 stacks up to 2016:

With a couple exceptions, we see small increases across the board. (Likely what happened here is companies who were exclusively surveying candidates after the application or interview moved into the “All of the Above” bracket.)

While these aren’t massive shifts, they do show a trend in the right direction.

This is great for multiple reasons. Smartphones are the sole source of internet access for many people, and preferred by most. With 91% of employers offering mobile apply, it’s practically universal.

3) Pre-Hire Assessments on the Upswing

As a screening tool, traditional pre-employment assessments can be a mixed bag. On one hand, they provide a scientific measurement of a candidates’ aptitude and relevant traits. On the other, they tend to prolong the hiring process and cause higher than normal rates of dropout (most assessments consist of 60+ closed-ended questions).

89% of all employers had assessments and testing systems in place, up from 81% in 2017. Oddly enough, the percentage of employers using each type of assessment went down across the board:

This probably means that while employers are more likely to use a pre-hire assessment, they are less likely to use them in conjunction with others (moving to a single test vs. a battery of tests). Since additional assessments usually add time to the hiring process, this sort of consolidation is generally good for candidates.

What’s Moving in the Wrong Direction?

There are also some areas for improvement.

1) Time to Complete the Application

While the Talent Board didn’t break down application time the same way they have in previous years, we get enough information to see that it’s moving in the wrong direction.

In 2016, 26% of candidates reported that their application took 15 minutes or less. In 2017, that number dropped to 20%.  The labor market is tight. Most candidates in a tight labor market are already employed; a long application is an easy way to lose their interest.

Learn more about how a great candidate experience helps you attract candidates who are already employed.

2) Feedback for Applicants is Declining

On the whole, feedback sent by a recruiter is being replaced with automated messages. Here you can see the difference between 2016 and 2017: 2016: 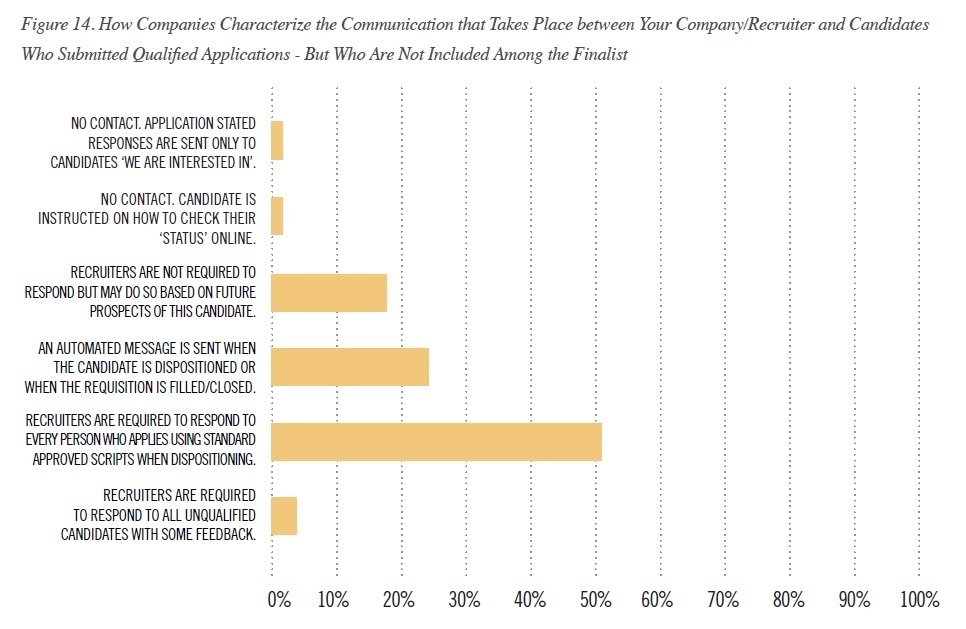 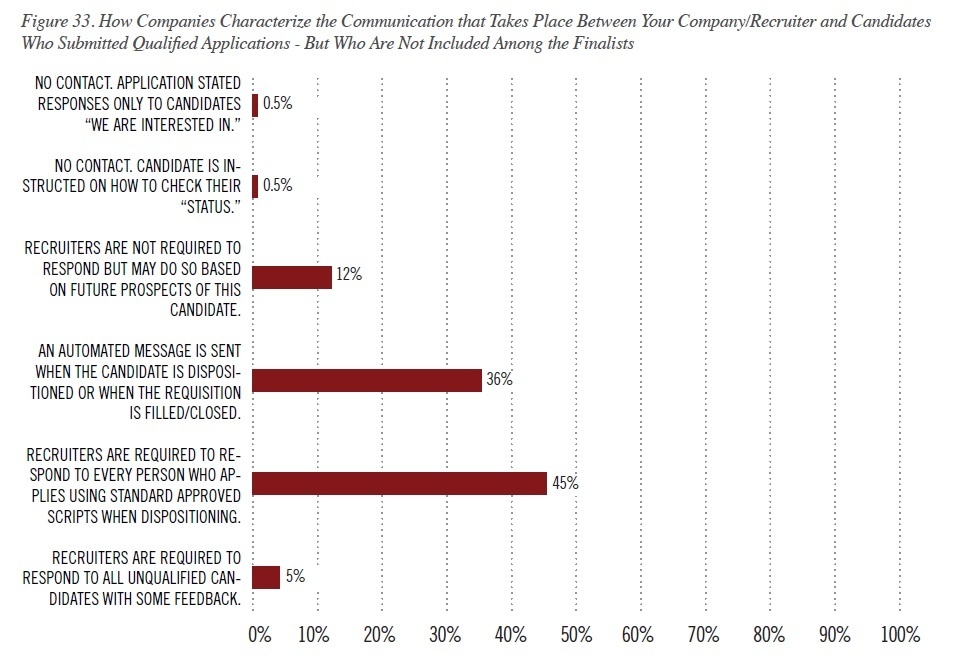 This isn’t really surprising - automation plays an important role in making hiring more efficient. It also looks like a percentage of organizations who did not require contact shifted into the "automation" category - this shift is a good thing. But the “human touch” is a prime opportunity to give candidates a great experience, especially when it involves sensitive situations like dispositioning. You can’t hire every candidate, but you should make every effort to ease the pain of rejection. A solid trade-off might be to ask candidates for feedback, even if you’re using automated messaging. 85% of candidates who gave their experience the lowest rating received no opportunity to provide feedback.

The candidate's experience doesn't just impact their perception of your brand.

1) Candidate Experience Has a Huge Impact on Referrals & Repeat Applications

Below you can see the difference between candidates who rated their overall experience one star (the lowest) and five stars (the highest).

What’s surprising is the massive impact a great experience has on referrals. 82% is huge. That’s nearly every candidate phoning a friend to recommend your open roles. Of course, the experience also has an impact on whether they’ll apply to your organization again:

2) A Bad Experience Makes Candidates Withdraw from the Recruiting Process 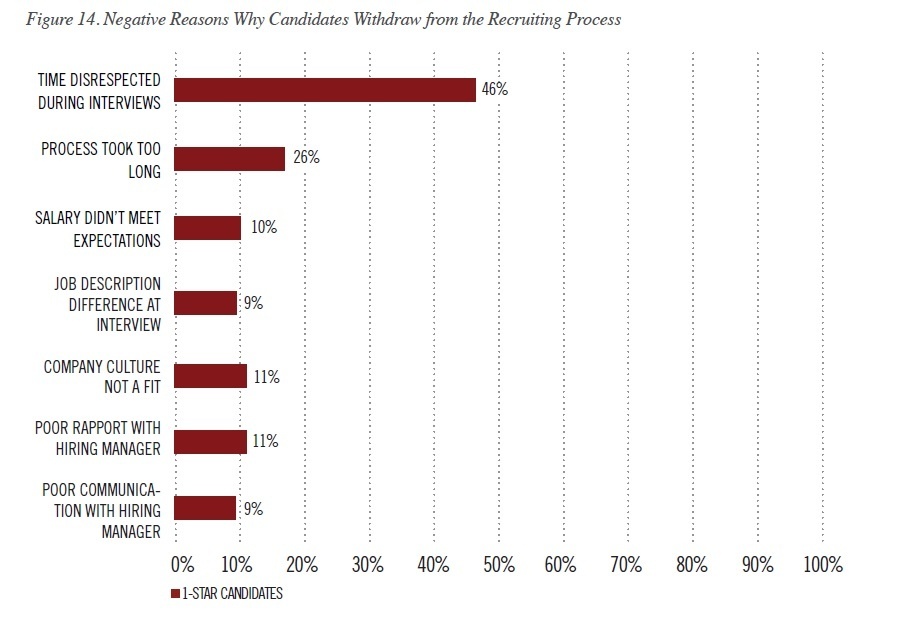 The Talent Board also points out that of candidates who gave their experience the highest rating and still withdrew from the process, only 1.4% left because they felt their time was disrespected. It’s interesting here that a negative candidate experience has more of an impact on the choice to withdraw than something like salary, though this could be because they’re withdrawing earlier in the process.

In 2017, we can see both of those numbers go up, with the most noticable increase (a 10% bump) for candidates who had a great experience.

A company’s career site is traditionally the primary place candidates look for job-related information. This is still true in 2017, but we can see the traffic diffusing across different channels:

This isn’t good or bad, per se - but it does mean TA leaders should spread their focus beyond the careers site.