How Talent Acquisition Can Become a Revenue Driver

Driving revenue is talent acquisition’s raison d’etre. Hiring employees that are best equipped to make the company money is the reason the department exists. But this is indirect revenue generation. By driving revenue more directly, the recruiting function can create a more compelling business case for its initiatives. Here's how talent acquisition departments around the world are using the hiring process to create revenue and improve their employer brand.

There’s plenty of data to support the notion that candidates are customers. The number of current (or prospective) customers as a ratio of candidates obviously depends on the position, but the most commonly cited average puts the customer:candidate ratio around 1 to 5. In other words, it’s safe to assume that at least 20% of your candidates are customers. In high volume roles, that’s huge. Providing candidates with a great experience doesn’t just boost your existing customers’ loyalty, it increases the chances of non-customer candidates considering your brand when making their next purchase. But even this would fall under indirect revenue generation. Recently, however, there’s been a trend toward talent acquisition driving revenue directly. Retailers and consumer-facing organizations are starting to see value in monetizing the candidate experience, through things like candidate-only coupons and other types of product vouchers.

When it comes to gaining the attention of high-ranking executives (and buy-in for your initiatives), there are two qualities that tend to get noticed:

HR traditionally has difficulty presenting a compelling business case for its initiatives. What better way to get buy-in from those that hold the checkbook than directly driving revenue and creating new customers? Of course, this approach is not for everyone. If your average customer is a large enterprise and your average deal size is $100,000, it goes without saying that most of your candidates won’t be customers (and good luck running a 25% off coupon past your CFO).

But if your organization has a large B2C component, and a large percentage of your candidates are customers, there are good reasons to try it out.

To some observers, the previously mentioned practice treads on some ethically shaky ground, particularly if candidates are given coupons and vouchers as “consolation prizes.” When offered after rejection, vouchers and discount codes have the potential to leave a sour taste in the candidate’s mouth: We don’t want you to work for us, but buy our stuff anyway. Properly implemented, vouchers and discount codes have the opposite effect: they'll enhance your brand as an employer. Many of your candidates are already fans of your organization - why not show them a little appreciation for their loyalty? They'll welcome the opportunity to pay less for a product they had their eye on anyway. When it comes to incentivizing candidates to make purchases, timing is everything.

“What if candidates don’t like it? What if they feel insulted?”  Frankly, you won’t know until you ask them. You should be collecting post-candidacy feedback anyway - if you’re not, now is a great time to start.  HireVue customers have an additional tool in their toolbox: the post interview survey. By tracking your Net Promoter Score (NPS), you can evaluate how candidates receive the coupon or other discounts. If it dips immediately after the coupon is introduced, you should reevaluate the approach.

This is not to say it should be scrapped entirely. As we’ve alluded to above, timing is everything. A coupon given as a consolation prize probably won’t be received as well as one given in return for completing an interview. If candidates tell you (either directly as feedback or indirectly through NPS) they don’t want to receive a coupon after a certain step of the hiring process, pilot the coupon at a different step.

While every organization will have different circumstances that affect candidates’ perceptions of the experience, I think we can create some general guidelines to act as a starting point before the rollout.  For example, if you’re planning on using the candidate experience to directly drive revenue, I think we’ve established that giving coupons and discount codes as “consolation prizes” to rejected candidates is not the best strategy. Again, timing is everything.

When is Too Early?

If coupons and other vouchers are given too early in the hiring process (like after the initial job application), you run a very real risk of flooding your ATS with candidates only interested in getting the coupon.  While this is great from a revenue-driving perspective, your initial screenings will become a headache.

When is Too Late?

If you give out coupons too late in the hiring process, you run the opposite risk: almost no one gets them (or you’re only giving them to rejected candidates). Which defeats the point of the initiative.

When is Just Right?

You can achieve a happy medium between these extremes by introducing coupons at the end of screening process steps, as a “thank you” for completing them: 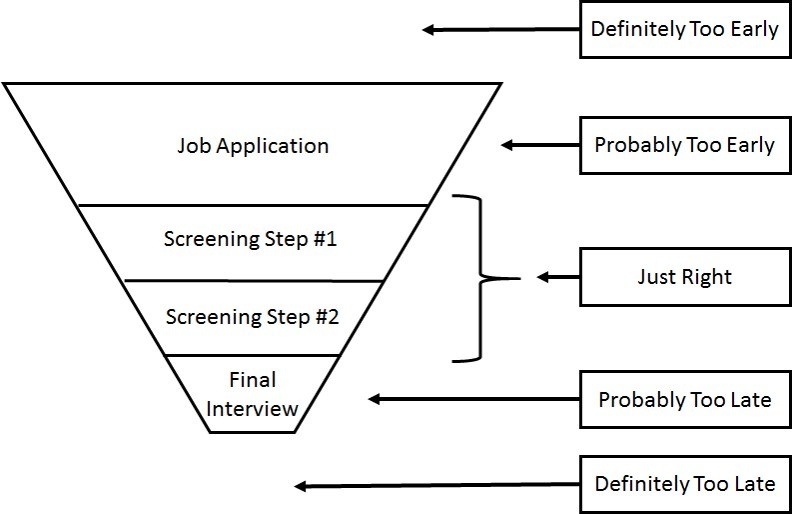 With over $2 billion in yearly revenue and more than 1,100 retail locations, Caleres (Famous Footwear, Sam Edelman, Naturalizer) is one of the world's largest sellers of footwear. Caleres provides candidates with coupon codes before a decision is made about their candidacy: most of these vouchers are offered immediately after the HireVue OnDemand video interview.

"When we look at the behavioral data, the profile of our best customers is not that dissimilar from our best candidates." - Marci Sigmund, Director of Talent Acquisition and Employment Branding, Caleres

Coupon codes are fantastic sources of data because they are easy to track. Caleres tracks each offer's redemption rate, the average transaction it leads to, and how many candidates it converts to customers.  Offering a coupon code after the OnDemand ensures that candidates are a) actually interested in the position they applied for; and b) still available in substantial enough quantities to effectively drive revenue. By providing the coupon code before a decision is made about their candidacy, Caleres also bypasses the “coupons as consolation prizes” issue.