Innovative Hiring Strategies: How To Use VR, AR, and 360 Video

Incorporating “hot” new tech into your hiring strategy might be tempting, particularly if your brand as employer is less well known. After all, what better way to present yourself as forward-thinking, growth-minded employer than with the latest technology trends?

Virtual Reality (VR), Augmented Reality (AR), 360° video, and other immersive new ways of presenting information have yet to really catch on in the mainstream (unless you count Pokemon Go), making them ripe for use by innovative recruiting functions.

But when (and how) should you actually build these attention-grabbing recruitment strategies into your process?

The answer is simple: after you’ve nailed down everything else. Once the hiring process is solidified, the “how” will become apparent as well.

Don’t Build the Porch Before You’ve Built the House

Many talent acquisition departments, enamoured with success stories from innovative adopters, make the mistake of trying to build a process around their shiny new VR headset or AR smartphone application. This most often happens at the college recruiting level, where new hiring strategies are easier to test.

Unfortunately, the very thing that makes a shiny new way of attracting candidates enticing is the same thing that could hurt you in the long term: it hasn’t been fully vetted by the average consumer.

While a compelling case can be made for the future of VR, AR, and 360° video (particularly as technology advances), we don’t know if they have any staying power. We don’t know if the Oculus Rift VR headset will become the next iPhone or the next Beanie Baby. You don’t want to build your hiring process around a Beanie Baby.

At their core, these innovative technologies are really just cool new ways of presenting information - and while they might help you attract more candidates, they won’t help you screen them.

With multiple subsidiaries and over 500,000 employees, Compass Group is the world’s largest contract foodservice company. The 9 million meals served by Compass every day are eaten everywhere from college campuses, to sports arenas, to large office complexes.

Like many international organizations with more well-known subsidiaries, Compass faces hurdles introducing graduates to their brand. To overcome this general lack of brand awareness, they implemented an innovative hiring strategy, using VR and 360° video to source a greater number of candidates.

Gathering Talent in One Place

During on campus career fairs, Compass Group uses a software called TalentGather to take pictures of resumes and parse the information into a database. Students on campus are also asked to complete a checklist detailing their needs and requirements: whether they want an internship or fulltime role, when they graduate, and what programs they are interested in. TalentGather crunches this data and compiles a report on each candidate. Students are then invited to take a HireVue OnDemand video interview.

At the same time, Compass engages with students on social media, providing them with relevant job information and a QR code that directs them to a HireVue OnDemand video interview.

All OnDemand interviews are sent to a hiring manager, where a decision about their candidacy can be made immediately. Some hires are made solely on the basis of student's recorded video responses, others are invited to an in-person interview. Between TalentGather and social media, Compass has two tools to direct candidates into their hiring funnel: 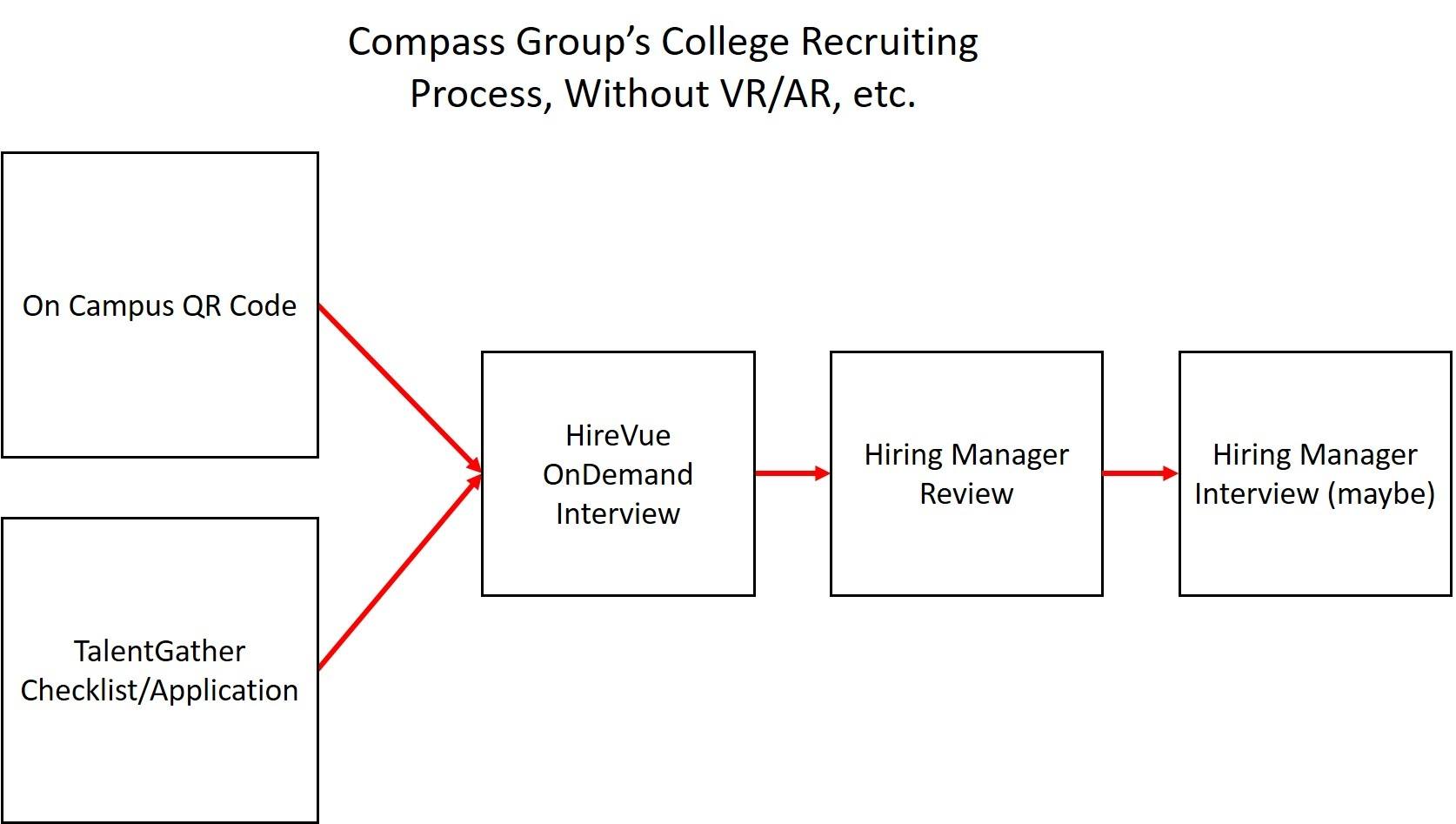 Compass Group doubles the number of tools they use to locate the brightest young candidates with the innovative use of new technologies.

They take Google Cardboard to their on campus events, letting students experience the Compass headquarters through Virtual Reality. Inside the VR world, current members of Compass’ Manager in Training Program share their experiences with prospective applicants. In the VR interface is a link to a video interview.

For students who miss the opportunity to visit Compass HQ through Google Cardboard, a 360° video version of the experience is also hosted on Compass’ career pages. Again, a link to record a video interview is placed in the top right-hand corner of the interface. 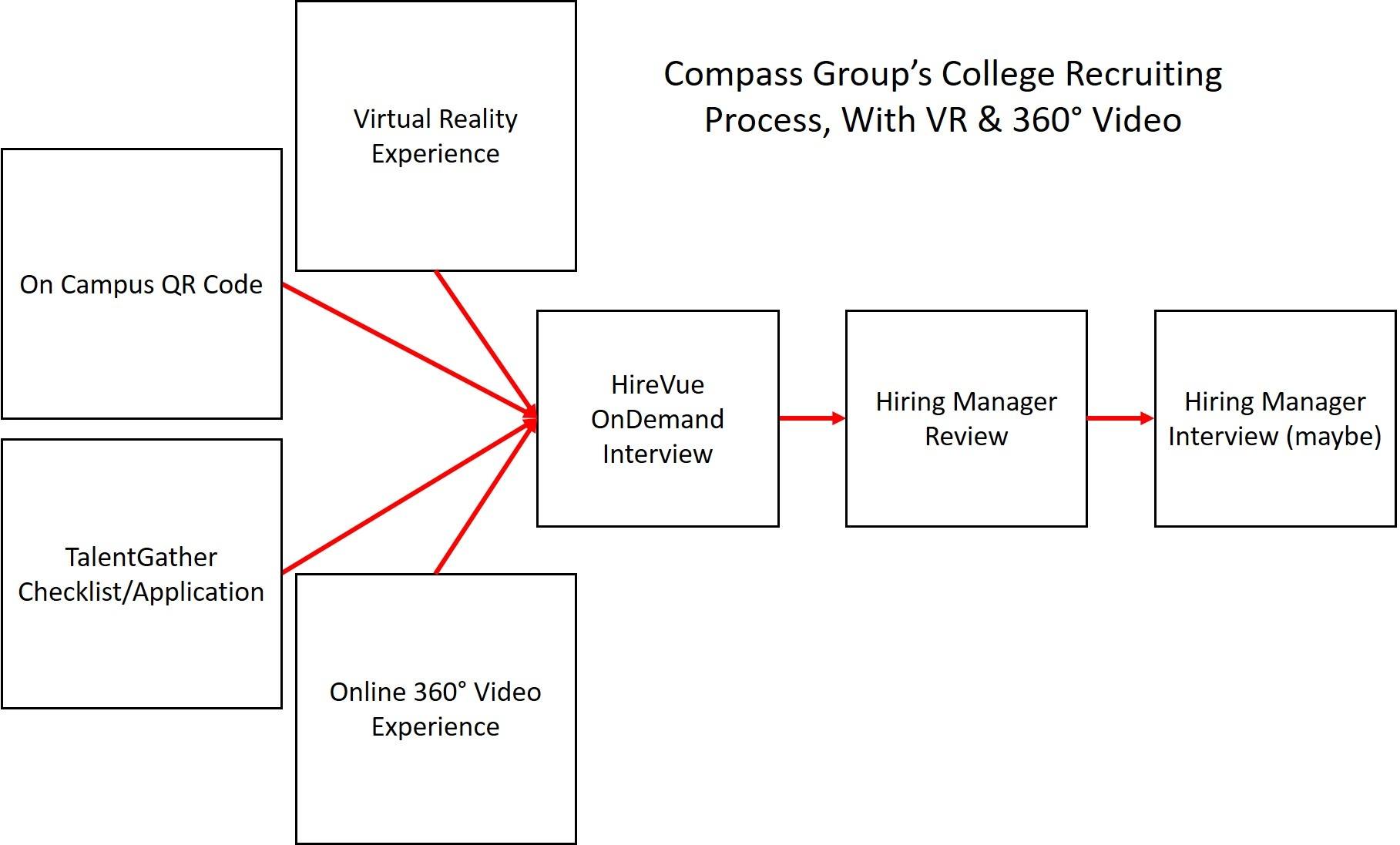 Since Compass Group knew they wanted to funnel all candidates through an on demand video interview, they used Virtual Reality and 360° video to augment (not replace) their existing sourcing strategies.

The results here are what you should expect from the incorporation of new technologies into your hiring process: a marked increase in the number and quality of candidates. Many Americans have yet to actually experience VR, so there’s something to be said for providing prospective applicants with their first Virtual Reality experience.

Untested (albeit cool) approaches like VR and AR are like stained-glass windows. They do a phenomenal job of enriching the hiring experience, but you definitely don’t want to build anything on top of them.

As Compass illustrates, new technologies are best used to augment and improve an existing hiring process - preferably one that’s already proved successful. With more avenues directing candidates to the HireVue interview, Compass had a larger pool of talent to pull from than before - and built their brand as a forward-thinking employer in the process.

Assessments and Big Data: Can We Predict Better Hires?

7 Things You Need to Know About Game-Based Cognitive Assessments

5 Signs You Need to Rethink Your Pre-Employment Assessment Approach