The best tools are a lot like Legos. Sure, you can follow the instructions and build something pretty great - but with a little outside-the-box thinking, you can build something spectacular. That’s what we witness every year at Digital Disruption, and this year was no different. It’s always great to see the crazy results, innovations, and transformations made by HireVue customers. But even among those presenters and attendees who shared their profound transformations and terrific results, some stood out from the rest - and were recognized as winners of our Digital Disruption 2017 Awards. Here they are: 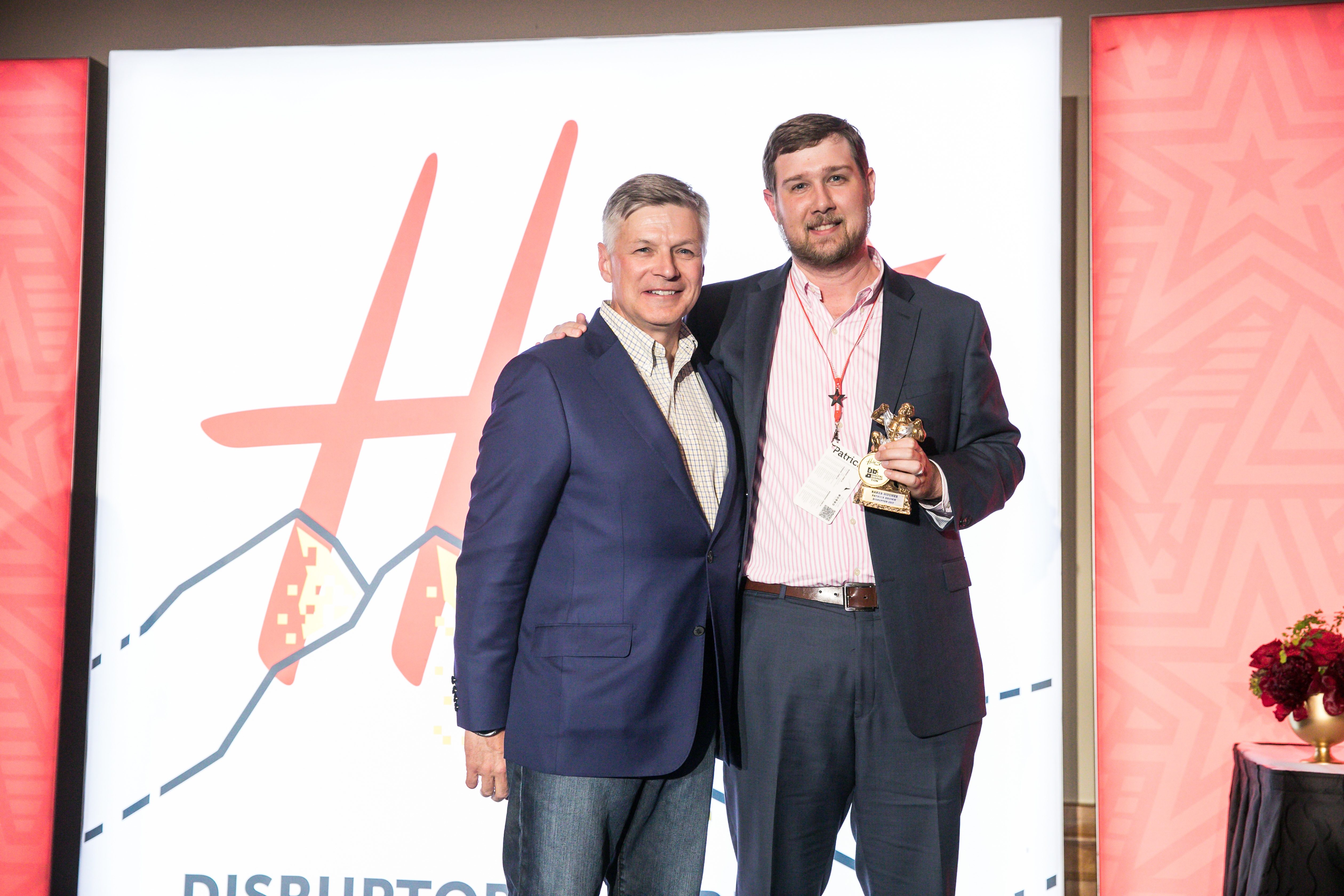 In years past this award was titled “The Recruiting Rockstar Hall of Fame” - but this year it became apparent that the drivers of change aren’t always specifically in the talent acquisition department. The very first winner of this revamped award was Patrick Brown, Process and Compliance Manager at oil field services company Baker Hughes. Amid falling oil prices and corporate setbacks, Patrick proved the value of HireVue at the executive level, relaunching video interviewing in over 90 countries. Thanks to Patrick, candidates from the US to Ethiopia have the chance to prove themselves over video.

Newcomer of the Year: Sabre 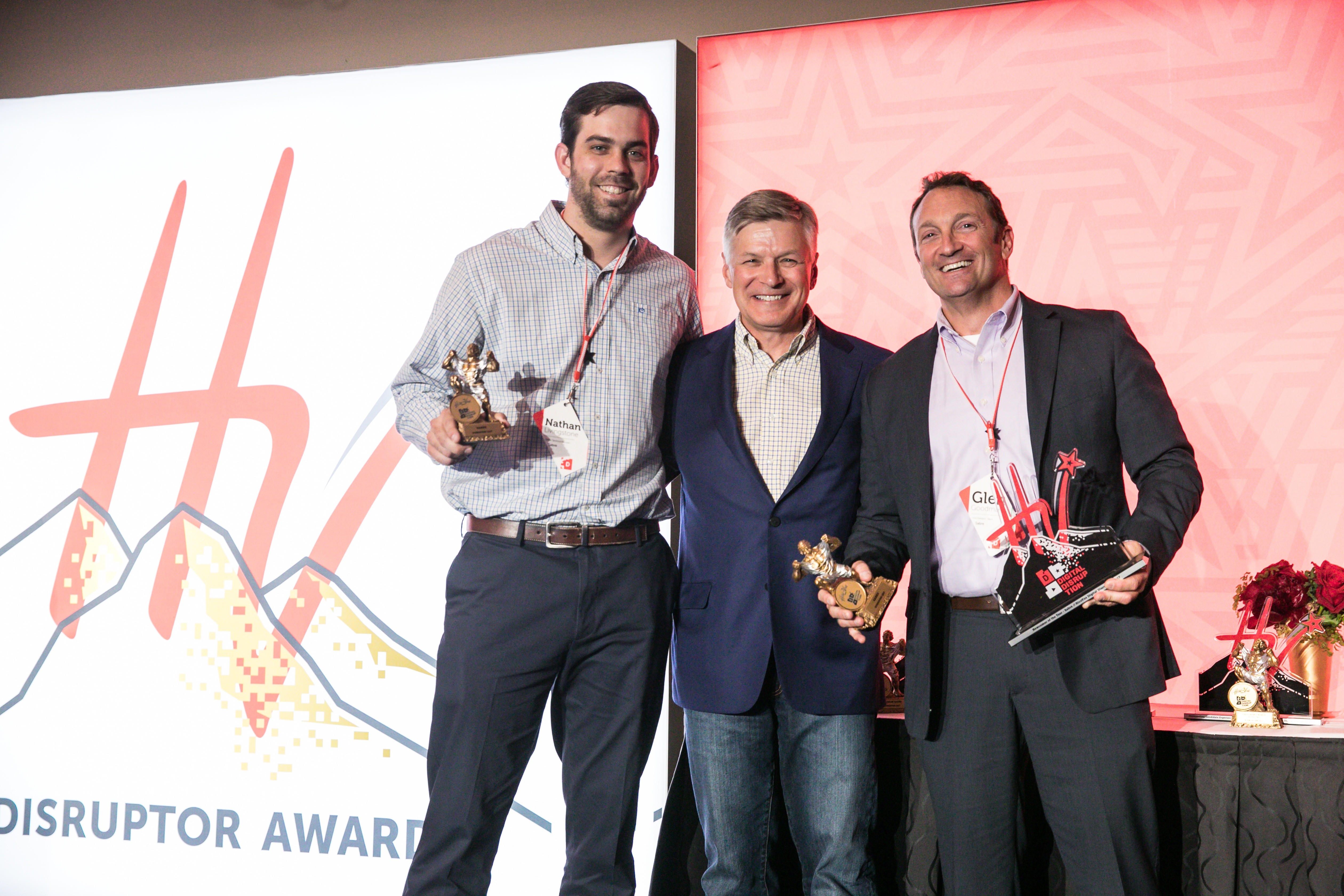 Our “Newcomer of the Year” award goes to a recent customer who has achieved phenomenal results within the first year of adoption. This year’s disruptive Newcomer was the travel technology company Sabre, known for its Global Distribution System and IT solutions for the hospitality industry. In its first year, Sabre sent over 1,500 on demand video interviews and coding assessments to their applicants. By moving away from traditional assessments, they used HireVue to identify the top 77 candidates in a field of 27,000 applicants. And that’s just in their first year!

Innovator of the Year: Urban Teachers 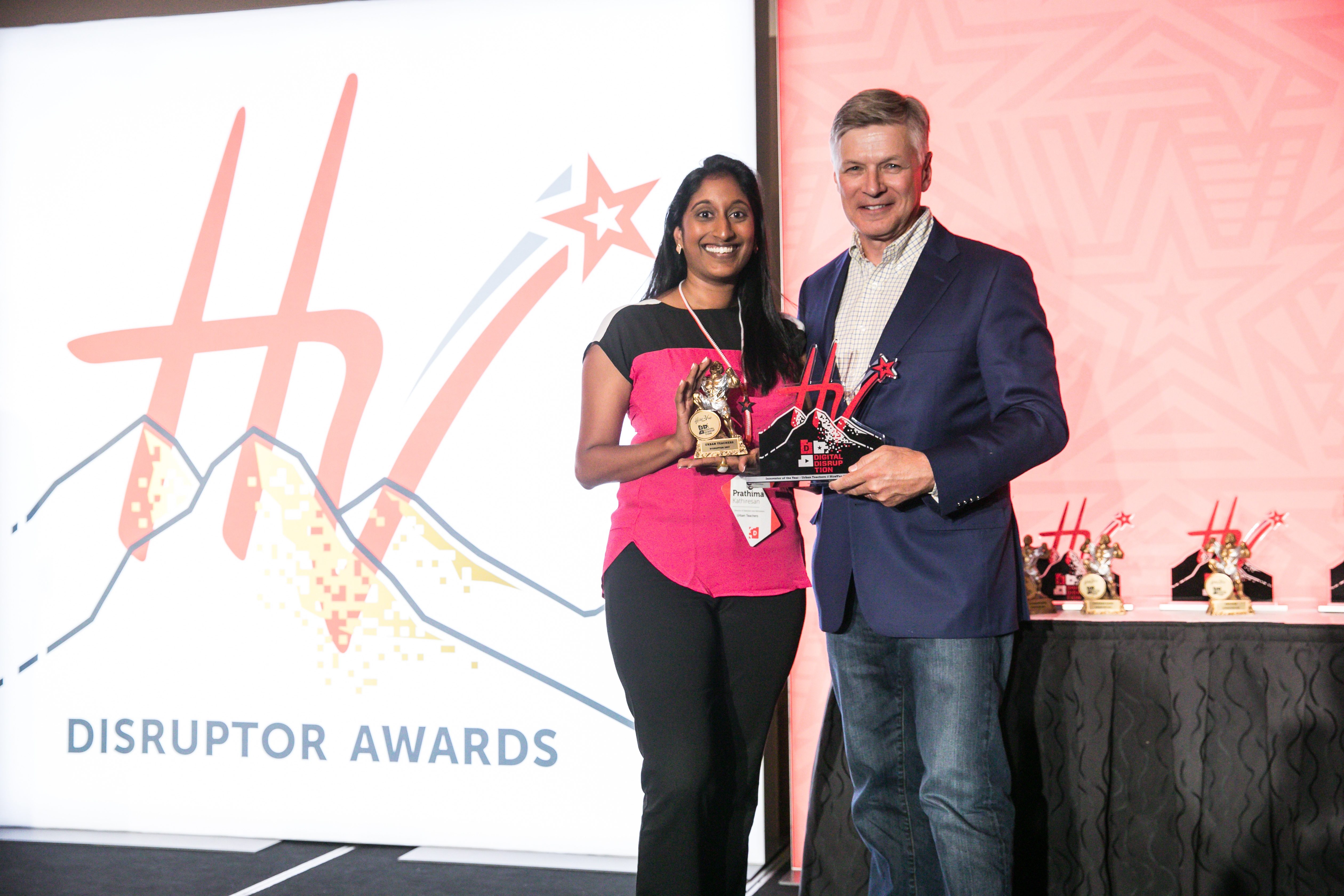 Urban Teachers uses HireVue in a huge variety of ways. Here’s a sample:

Their uniquely designed performance tasks and question sets have saved hours of time for both candidates and recruiters. All in all, Urban Teachers has doubled their hiring efforts without any additional staff. 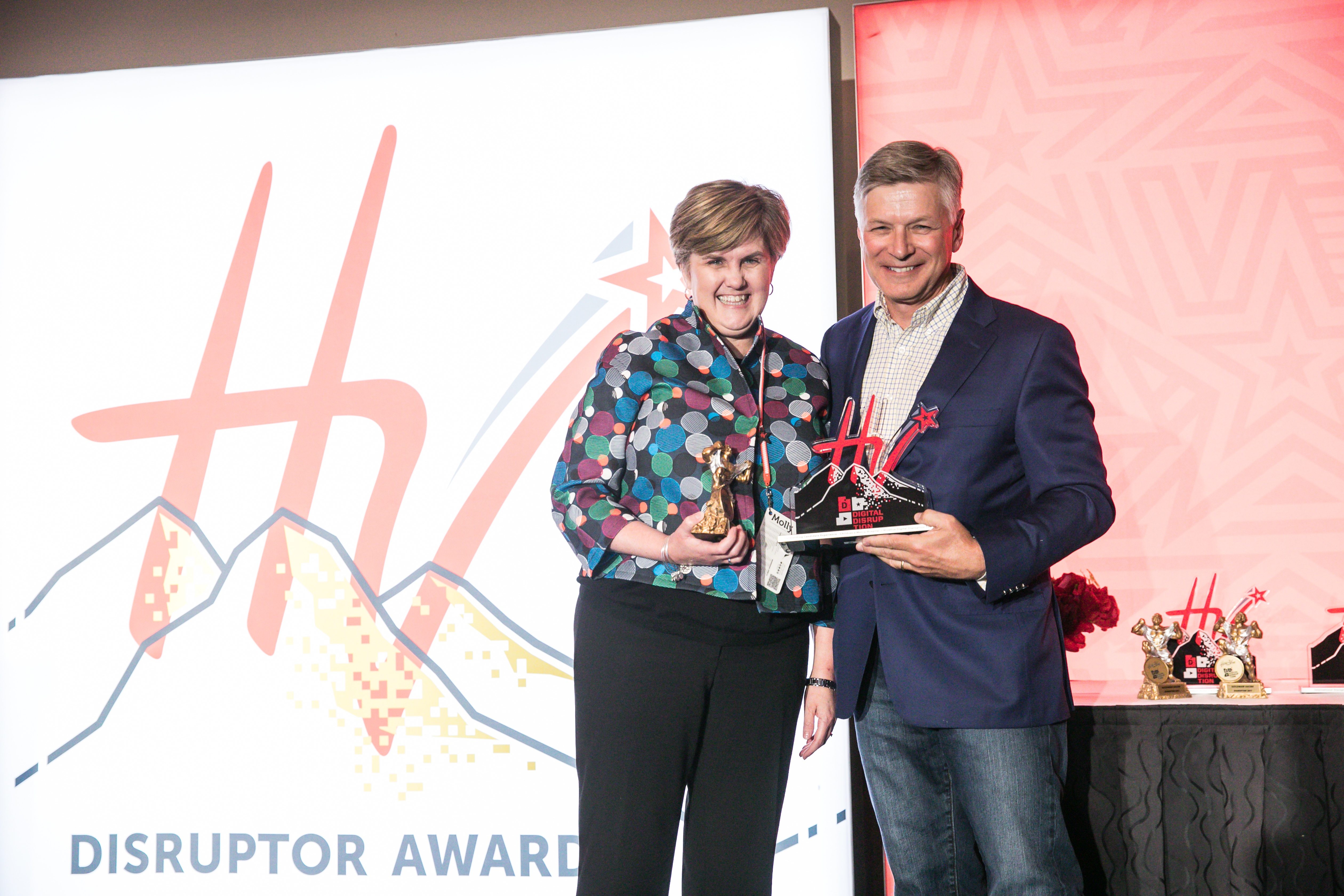 The experience of the job candidate is often their first, if not most meaningful, interaction with an organization’s brand. Children’s Mercy Hospital is a familiar face at Digital Disruption, and their pioneering of the “Introduce Yourself” hiring process earned them the “Innovator of the Year” award last year. This year, they’ve taken their already stellar candidate experience a step further, incorporating the children of Children’s Mercy into the video interview process. Through pre-recorded video, they introduce aspirants to the process, ask the questions, and even say “I will turn this over to the grown-ups” once the introduction has been completed. Interestingly enough, CMH was inspired by a winner at last year’s awards: a school who greeted applicants with introductory videos from current students.

International Disruptor of the Year: Unilever 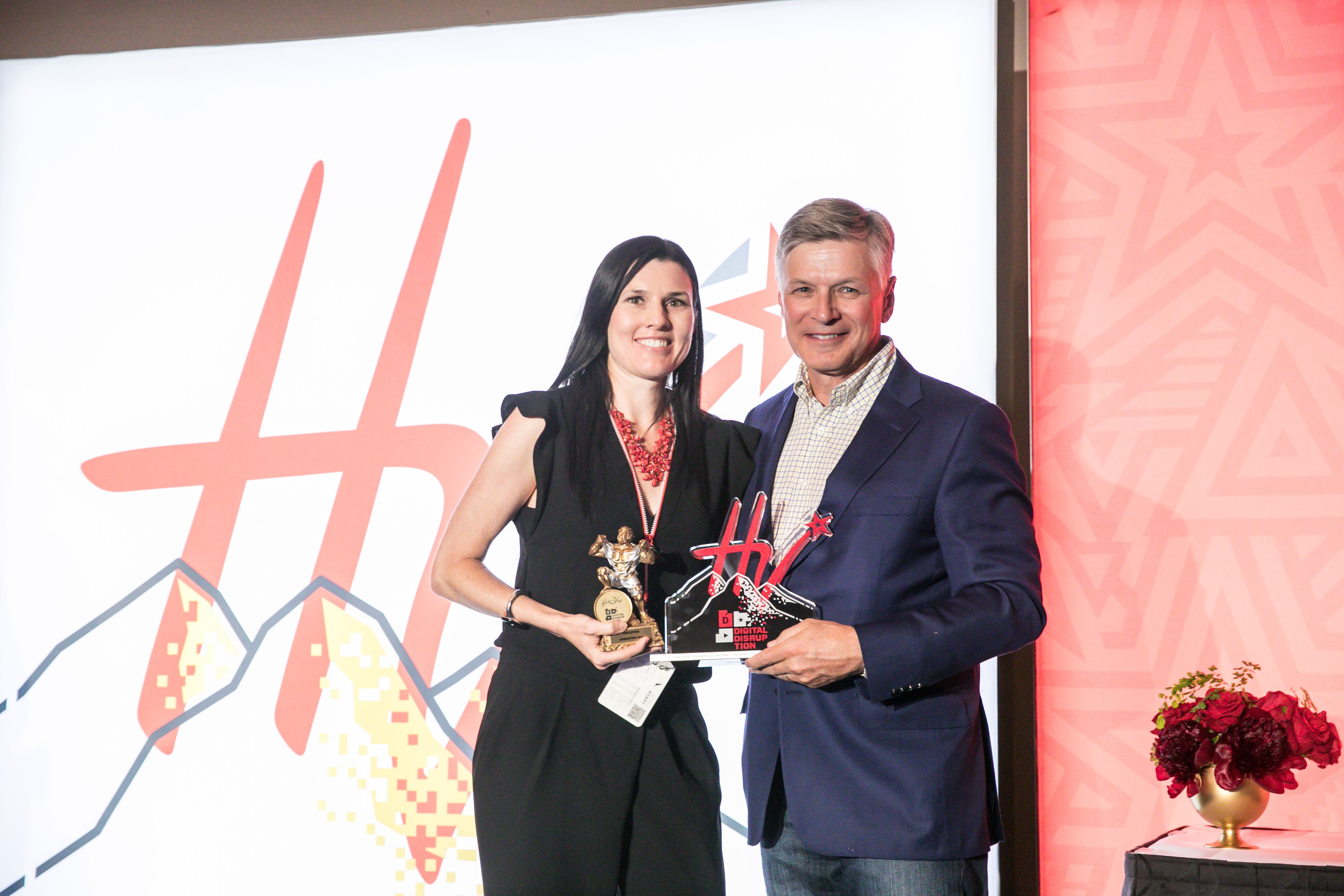 If you haven’t seen Unilever’s revamped hiring process, check it out here. By combining gamification, video interviewing, and on-site job simulations, they’ve created a great experience for both candidates and recruiters. Unilever’s digitized, mobile, and AI-driven hiring process cut their time to hire from four months to two weeks, all while identifying better candidates than ever before. For bravely venturing into the disruptive world of new technology and artificial intelligence, Unilever is our International Disruptor of the Year!

Disruptor of the Year: Goldman Sachs

“Disruptors of the Year” have one thing in common: they get it. They know that video intelligence is about an elevated, branded experience. A fairer and consistent process for all candidates. Casting a wider sourcing net and expanding diversity. Wall Street is known for their incredibly exclusionary hiring practices. With most hires coming almost exclusively from the Ivy League, banks in the world’s largest financial center have traditionally been elite clubs of League Alumni. But hires from these schools tend to come with a pricetag: they follow the money. With no loyalty to any single bank, top bankers create a headache for HR by frequently hopping from bank to bank. In order to find more loyal hires, Goldman Sachs spread a wider net than ever before, ditching their limited on campus interviews in favor of more inclusive video interviewing. Their efforts to stem attrition and hire a more diverse workforce (both in ethnicity, gender, and pedigree) gained them press from the likes of CNBC, The Wall Street Journal, and the New York Times - and now at Digital Disruption 2017. For disrupting one of the most storied industries in the world, Goldman Sachs is our Disruptor of the Year! Check out their awesome video showcasing their new hiring process here.

We've got all the sessions for you right here, on demand.