Nearly 100 hiring professionals and human resources leaders converged on the Soho Hotel in London last month for the first-ever HireVue European Summit. Filling out a cinema screening room, we heard presentations from innovative UK companies as well as HireVue experts over the course of a highly informative afternoon.

These are the major highlights and customer stories from the summit: 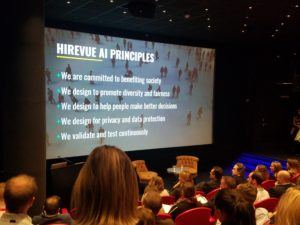 The first presentation of the day was given by HireVue Chief Technology Officer Loren Larsen. He described how using a combination of pre-hire assessment science from the field of industrial/organizational psychology plus machine learning/artificial intelligence from the data science world is helping organizations identify the best talent in an objective and scientifically validated way.

In a discussion about why scientifically-based assessments are needed in hiring, Loren shared the results of a study showing that people who are attractive are twice as likely to be recommended for hire by humans as those who aren’t as attractive. However, the study also found that algorithms designed to provide objective assessments of candidates do not show the same attractiveness bias. It’s alarming, but true that unconscious human bias is constantly at play in hiring despite our best efforts to be fair and impartial.

Learn the Science Behind HireVue's AI-Driven Assessments Watch the Webinar

2) Getting Ahead of the Game: How Dyson are Changing Early Careers Hiring

We were fortunate to hear from Dyson’s Sarah Wallace, Global Head of Early Careers and her colleague Gillian Howarth, Global Head of Talent Acquisition Excellence. The two delivered a fascinating fireside chat about how they’ve implemented HireVue as part of a highly successful new approach to early careers hiring. At a time when applications were surging by 50 percent, the team sought a way to effectively evaluate and engage early careers candidates with game-based assessments. 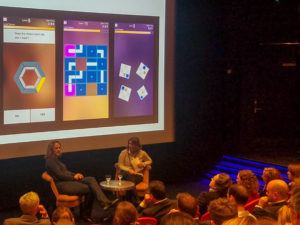 They looked at several systems, but found many were cost-prohibitive, created without rigor, and were too “gimmicky” for the Dyson brand. What’s more, their IT department strongly preferred integrated products rather than bringing in tools from multiple vendors. Already a HireVue video interviewing and CodeVue customer, the Dyson team discovered HireVue’s new game-based assessments offering.

Sarah explained, “At a time of increased data governance, we said, ‘It’s got to be HireVue.’” The biggest benefits according to Gillian and Sarah are:

Next on stage was Clemens Aichholzer, Senior Vice President of Game-Based Assessments at HireVue and the founder of MindX, acquired by HireVue in May of 2018. Within just the first three slides, the audience became deeply focused as they attempted to solve two cognitive-test puzzles. 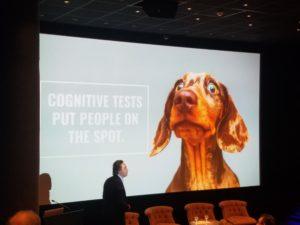 As Clemens said, we all tense up when confronted with cognitive tests, yet IQ is the single best predictor of job performance, closely followed by conscientiousness. So validated cognitive tests help assess job candidates effectively, but not if those candidates with the most job options drop out due to intimidation or a bad test experience. The good news from a candidate experience perspective is that cognitive ability tests are ideally suited to gamification.

Built on a foundation of industrial/organizational psychology, HireVue game-based assessments focus on job-relevant cognitive traits. Clemens’ team was able to make them both fun and challenging, and also to continue increasing the engagement as candidates show they’re ready for bigger challenges. HireVue games don’t reinvent the wheel; they only improve what works. He noted that it’s critical to retain good measurement properties and use knowledge from IQ psychology and ongoing research. In the end, the team was able to create challenging, engaging games that have a 95 percent completion rate as well as very high concurrent validity with traditional IQ tests.

Game-based assessments seem well-suited to young candidates just beginning their careers, as Dyson demonstrated in their session. But can they be effective in identifying executive leadership talent? 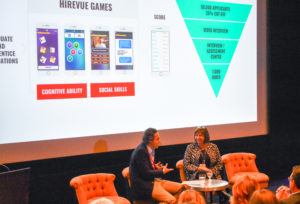 Sharon Sands, a partner at global executive search and consulting firm Heidrick & Struggles, believes they can. Today’s corporate leaders need to have a high degree of agility and digital dexterity, competencies that Sharon has determined are readily measured with HireVue game-based assessments. She related that Heidrick & Struggles is committed to using a data-driven strategy as they evolve their consulting and executive search process.

In addition to objectivity and fairness, Sharon says that having a professional look in their game-based assessments of choice was important. Her team performed an RFP and, she says, “We kissed a lot of frogs,” noting that, while a lot of cool technologies are being developed, many of the teams behind those technologies “couldn’t run a company and weren’t client-focused.” In the end, the decision rested on finding assessments that are equal parts robust, validated psychometric science and “cool, amazing technology.” HireVue Game-based Assessments were Heidrick & Struggles’ choice for the new leadership assessment process, and Sharon said she looks forward to reporting on results in the months ahead.

5) The Future of Assessments: Evaluating the Whole Candidate

Before launching a look at the past, present, and future of assessments science, HireVue Chief IO Psychologist Nathan Mondragon explained why organizations use selection tools such as pre-hire assessments. The primary reasons have to do with consistency and objectivity, systematic use of predictive success metrics, legal defensibility, and the ongoing quest for higher-quality hires. 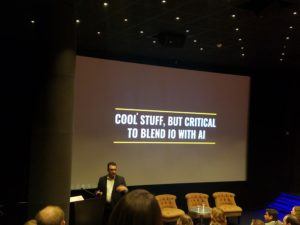 Job assessments have been in place since the US Army began using them in World War I. AT&T used the “in-basket exercise” in its Assessment Center in the 1950s, which was the period in which the “fill in the circle,” multiple-choice Wonderlic test was devised. While these types of tests have been validated and accepted, they do fall short of measuring the “whole person,” or the fuller range of competencies and characteristics that help us understand candidate fitness for each job.

Today, HireVue Assessments can analyze a range of data points that are available from a video interview – up to 25,000 are available for study by an algorithm – in order to study a candidate’s:

This tells us much more about a candidate than can be gleaned from answers to multiple-choice questions. Even ten years ago, the hardware and software computing power that could accomplish such robust and expansive data collection and analysis didn’t exist, but now it does.

As long as companies creating AI-driven assessments are establishing robust processes to mitigate bias in algorithms, and as long as the focus is on predicting top performers without adversely impacting any group, the use of technologies like HireVue Assessments can have a significant positive impact on hiring.

In the future, we may be able to automate the building of certain assessments, offer immersive role-playing test questions, or even assess how well people are functioning inside a teamwork situation. No matter how the future of assessments unfolds, it will be critical to continue blending IO psychology with data science to keep human rights and human values at the center of the process.

6) Panel: The Future of Assessments 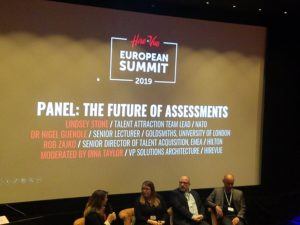 Asked how the panel has seen assessments evolve in recent years, Lindsey noted that NATO Communications and Information Agency currently use video interviews to offer fair, robust assessments to analyze both technical and soft skills for IT posts. Lindsey noted the rapid acceleration in the market over the last 10 years from psychometric testing, through to video assessments and now gamification and AI and the variety of choice on the market when selecting an appropriate assessment tool.

Rob explained that, because Hilton job candidates are quite often Hilton customers, his team has focused in recent years on bringing the idea of hospitality into the recruiting experience. Using HireVue Assessments, they’re able to personalize the experience and measure whether candidates fit Hilton’s culture and values.

Dr. Guenole noted that the move from paper to online assessment testing was the first move to modernize such tests. However, there is the important consideration of candidate experience. Many companies now ask, “Can we keep as customers the candidates that don’t get the job?”

Dina then asked the panel about the impact of the General Data Protection Regulation (GDPR) on hiring assessments. Dr. Guenole explained that he does validity studies on AI-driven predictive hiring tools, but that to do that, job performance data on the candidates who got the job is needed, and GDPR has slowed the process of gaining the data to perform these validation studies.

Finally, the panel was asked how AI will impact talent acquisition in 2019. Rob said that, because talent acquisition teams sometimes lag behind the overall business in adoption of new technologies, the gains that will be seen this year are likely to be incremental. Lindsey noted that Google and IBM were investing into AI hubs and start-up companies, which will in turn make general adoption of AI easier within organizations. Lindsey was not worried about the impact of AI in assessments, noting that if applied correctly with the right validation in the algorithms, it can increase diversity, create efficiencies and improve candidate experience. Lindsey expressed her belief that AI could in the future develop more human-style interactions within AI assessments to make even stronger predictions about performance and quality of hire.

The first HireVue European Summit was thought-provoking and informative, yet it was also extremely enjoyable to meet and talk with such a large group of forward-thinking human resources professionals. All of us at HireVue hope that more of you will join us at our conferences in the future as we continue to improve hiring for both candidates and hiring teams.