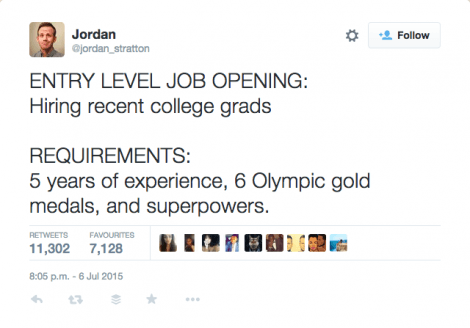 It’s a conundrum commonly faced by hiring recent college grads. Companies post job ads for “entry-level” positions, but they won’t hire anyone for their entry-level position who doesn’t already have job experience. That’s because HR tends to assume that experience equates with better job performance. We want people to show up and instantly perform the job with minimal training, including sales training. One Fortune 500 company’s recruiters, believing in the “experience = better performance” myth, decided to slash straight-from-university hiring. However, within three years the company had not only restored its program of hiring recent graduates, but had actually increased this activity by 20 percent. It’s a lesson about challenging conventional wisdom with data-driven insights.

Johnson & Johnson (J&J) knows a little something about staying power: They’ve been in business since 1886. Even great companies run into HR hiccups, however. To improve retention and job performance a couple of years ago, J&J managers were instructed to hire fewer college grads. After new grad hires dropped 10 percent, the company’s HR leaders, along with the head of J&J’s newly formed analytics team, decided to comb through the company’s old data to discover whether new grads actually performed more poorly than experienced workers. After reviewing 47,000 records, they discovered college graduates performed comparably with experienced hires in terms of executing the job and securing promotions. The real revelation, however, was that new grads tended to stay with the company longer after their hire dates. Even though a star hire tended to give recruiters a “sugar high”, according to J&J HR exec Peter Fasolo, candidates who looked like great gets on paper didn’t necessarily enjoy long-term success with the company.

What J&J Did Next

After realizing that hiring new grads could deliver the same job performance while also improving retention, J&J increased its presence on college campuses. They haven’t necessarily branched out to new colleges, but they’re spending more time with universities that are proven sources of good hires. The company also boosts retention among new grads by offering a two-year leadership program. The program groups new grads together, helping them build strong social ties, and gives them the chance to meet leaders across J&J. New grad hires also connect with a mentor who has recently graduated from the leadership program. They’re also assigned to an HR VP with whom they have regular conversations.

What You Can Do

Check out our college recruiting playbook to learn how digital interviewing transforms the candidate experience for new grads. After incorporating digital pre-screening interviews into its campus recruiting process, TJX not only saw a big jump in its NPS but also saved $368K on phone screenings in the first year. Also, keep in mind that J&J’s commitment to grooming new grad hires plays a significant role in boosting retention. Hiring a great candidate is only the beginning. You have to build and coach great teams.