How Rackspace Improves Quality of Hire and Speed of Hire

Improving hiring metrics across the board requires a fundamental transformation of the conventional hiring process.

Last week we looked at a hypothetical scenario comparing the traditional hiring process to one that was digitally transformed.

This week we’ll delve into specifics, courtesy of Rackspace - one of the world’s premiere managed cloud providers.

A History of Customer Service Excellence

Rackspace’s customer service team is trademarked under the name Fanatical Support™. Affectionately known as “Rackers,” the team is made up of over 5,700 technical professionals with a knack for explaining complex cloud infrastructure.

A Problem with Scale

As a high-volume position with high entry-level requirements, the conventional hiring process’ emphasis on resumes and phone screens was too slow, and could not scale with Rackspace’s hiring needs.

As you can see: 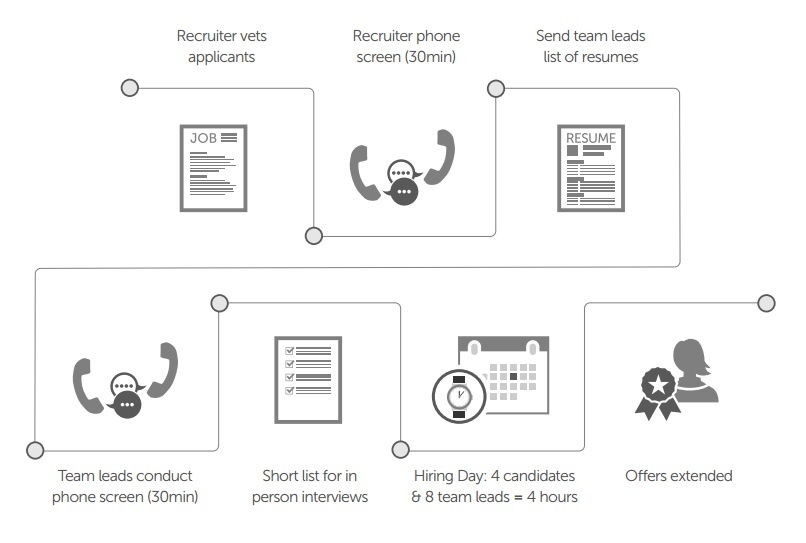 Under this system, recruiters and the leadership team were spending over 1,100 hours on phone screens and interviews (mostly phone screens).

Last year at Digital Disruption, the founder of HireVue, Mark Newman, observed that the candidate search is frequently likened to finding a needle in a haystack:

“The reality is that the average job opening has over 250 applicants, yet less than six people are actually considered,” he lamented. “We do not need more candidates. We need a powerful electromagnet.”

They considered more candidates than ever before, cut interview and phone screening time by 87%, and hired 50% faster.

“On average, each quarter, the leadership team and recruiters were spending over 1,110 hours on phone screens and interviews, with the majority of those hours being spent on the phone. Now we’re down to about 140 hours per quarter and the majority of that time is spent face to face with candidates. We’ve seen the time savings further result in hiring costs savings from $48,000 (previously) to $6,148 per quarter.” - Laura Parra, Rackspace

Prior to transforming their hiring process, Rackspace had a fairly respectable interview-to-hire ratio: 1 in 4. Given the multiple rounds of phone screening and interviewing each candidate was put through, this is hardly surprising.

Now, that respectable ratio has doubled to 1:2. In other words, 50% of candidates interviewed face-to-face are offered employment.

Get the Case Study

For more on how Rackspace transformed their hiring process, download the full case study.

The Empowered Recruiter: Transform from Transactional to Strategic [Webinar Recap]