You've nailed your interview, and whether or not you'll get the job is up to fate to decide. Or is it?

Why a Thank-You Could Be the Difference Maker

According to data released recently by CareerBuilder, 22 percent of hiring managers are less likely to hire a job candidate if they don’t send a thank-you note after an interview. Why? According to some job interviewers, it shows a lack of follow-through and that the candidates aren’t serious about the job opportunity.

Of course, many job seekers are uncertain about the line between following up with an interviewer and pestering them. A good rule of thumb is to send a thank-you note the day of your interview, and then checking back in a few days after any deadlines they gave you (assuming you don't hear back) is acceptable.

Determine the Most Proper Way to Say Thanks 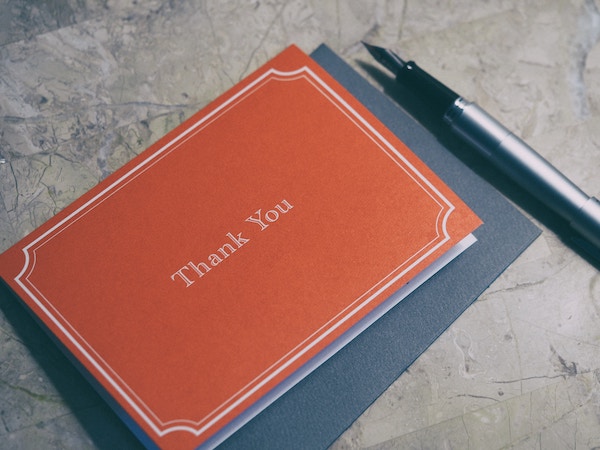 Obviously, the most important of these two actions is the thank-you note. How you send the thank-you note, of course, is up to company culture; traditional companies would likely want a hand-written note, while more modern companies that use video job interviews software would likely appreciate an emailed thank-you. However, refrain we suggest from making a telephone call to thank your interviewer-- one hiring manager told Forbes that, "for many, many years, the last thing I wanted was a candidate to interrupt my busy day to thank me for the job interview they just had."

What to include in your thank-you note? It's up to you, of course, but Forbes recommends:

Put effort into your thank-you note, and don't just reiterate your cover letter. Speak intelligently about your interview-- show that you were paying attention, and were engaged with the interviewer during the process. Sending a follow-up letter can make the difference between getting the job or being passed over for the position. So, really, what do you have to lose?

Prepare For Your Digital Interview Like a Pro: 4 Tips

3 Tips to Interviewing at a Startup